The real reason why I make impact films 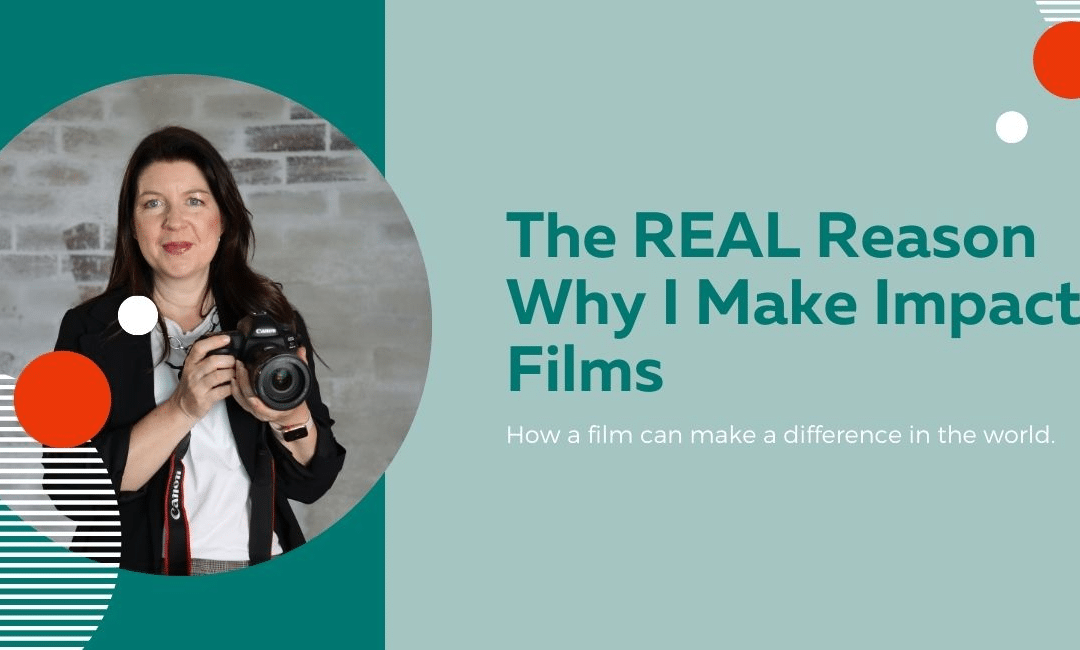 The real reason why I make impact films is that films really can make a meaningful difference in the world.

In my work, I often talk about the power of storytelling and how a film can change lives. It’s a stretch for many people to believe. And often hard to quantify. So when a change happens and it’s directly attributed to one of our impact films, it’s kind of a big deal.

I want to share one of those stories with you. But bare with me because it starts with some off-putting words.

Paediatric and palliative, words that fit together like repelling magnets.

However, it might surprise you to know that the outcome of combining these two words which conjure such deep emotion, is nothing short of life-changing. After creating a film on children’s palliative care I’m very aware of what a conversation killer the topic can be. (And by the way this is a feel good story so be brave and stick around for feel good fuzzies.)

The fear of talking about death and dying, particularly relating to kids, is high. I get it, I’ve often struggled with this myself. It’s hard. But illness and death happen and it can happen to kids too. (Stick with me, this IS going to be a happy story). People need to understand this better in order to help those who are going through life threatening illness with their own child.

So, that’s why we made our impact film Little Stars the surprisingly life-affirming stories of young people around the world living with life-threatening illnesses.

The project was to showcase the amazing things that can be achieved when seriously ill children and their families receive palliative care. Not everything about death and dying has to be hard.

Let me wind back the clock a little to when we set out to produce Little Stars and I got past crying every time I read a children’s palliative care story… being pregnant at the time did not help keep my tears in check! The more we researched the more we realised just how important access to this specialist care is, and how many children globally simply can’t access it.

If you are living in Australia, UK, USA or Canada then you’re receiving a level of health care unknown to the vast majority of the world’s population. And access to children’s palliative care, essential for anyone with a child that has a life limiting illness, is probably out of your reach.

We aimed to make an impact film that could help people understand children’s palliative care. In other words, an advocacy film. Or in buzz words- an ‘impact’ documentary.

Generally, I think it’s a difficult thing to explain to someone why a film can make a difference, the impact it can make. The evidence is usually anecdotal.

How many views, shares, likes, or number of screenings? That’s the stuff you can actually measure and how success is gauged.

But how do you know when your film has made a difference? Not just that stats on views, but, what did those viewers do after they watched? Did it have an influence on their behaviour, thoughts, empathy to the issue, did they take an action?

That’s always the dream. Otherwise how can you poor your blood, sweat and tears (a lot of tears in this case) and 3+ years of your life into it?

In the case of Little Stars, it won awards and was picked up on broadcast television globally. We did receive good feedback but I just felt the results were not as good as I would have hoped. I don’t feel like my work on this project was really done, it hadn’t quite got there.

And then, last year our distributer let me know that they no longer represent the title, it’s out of contract.

Perhaps the subject is ‘just too hard’ for most of us to hear.

Unexpectedly, I received the most wonderful and surprising email. A change in legislation that means nurses in Zimbabwe are now allowed to administer morphine to children. A screening of Little Stars in Zimbabwe in 2016 was directly linked as a causation too lobbying for this change.

This was and still is big news! Pain is very serious and often untreated issue due to a lack of access to essential medicines like morphine, especially in children.

A lot of people lobbied very very hard to make this happen, but to hear that our film was part of that journey, is really elating.

Specifically it was cited that after a screening of Little Stars the audience recognised that the children featured in the film were not in pain and their families were not in distress. That palliative care was helping them both physically and emotionally. The teams in Zimbabwe wanted this for their patients too. And now they do.

So hello world, see what can be achieve when we work towards a mutual and important goal.

Below is the trailer for Little Stars, now it’s your turn to play a part and share the message with your own family and friends. Children with life limiting illness deserve palliative care, and we have to demand access to it for all children, everywhere on the planet.

To truely understand the needs of children’s palliative care, you have to look past the anticipatory grief and loss, you have to focus on life. That’s where the joy is, that’s where the important work is done. And that is where the disparity in health is so vast that all we could do was hope that shinning a light on the subject through film would have some valuable impact.

“Where there is love, there is life.” As Gandhi said.

You can also see more of my blogs here

This website uses cookies to improve your experience while you navigate through the website. Out of these cookies, the cookies that are categorized as necessary are stored on your browser as they are essential for the working of basic functionalities of the website. We also use third-party cookies that help us analyze and understand how you use this website. These cookies will be stored in your browser only with your consent. You also have the option to opt-out of these cookies. But opting out of some of these cookies may have an effect on your browsing experience.
Necessary Always Enabled
Necessary cookies are absolutely essential for the website to function properly. This category only includes cookies that ensures basic functionalities and security features of the website. These cookies do not store any personal information.
Non-necessary
Any cookies that may not be particularly necessary for the website to function and is used specifically to collect user personal data via analytics, ads, other embedded contents are termed as non-necessary cookies. It is mandatory to procure user consent prior to running these cookies on your website.
SAVE & ACCEPT